BHF Alumna Ella Reed is studying for a PhD at the BHF Centre of Research Excellence, King's College London in the laboratory of BHF Professor, Manuel Mayr. In this Alumni Story, Ella tells us more about the team's research, and the joy of conquering the London to Brighton Bike Ride. 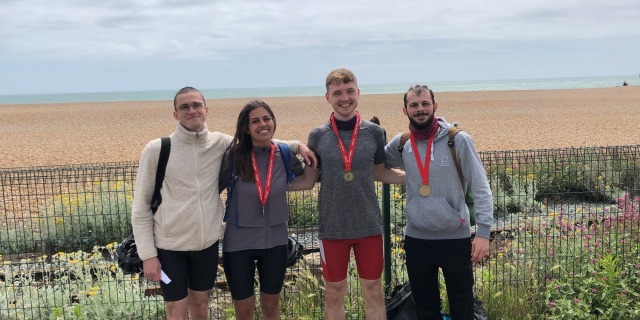 Originally, I was attracted to the BHF MRes-PhD programme because of its interdisciplinary approach to cardiovascular research. However, as I’ve been on the programme I’ve become increasingly aware of the impact of BHF research.

I now work in the proteomics laboratory ran by Professor Manuel Mayr at King’s College London. The working environment is multidisciplinary with clinicians and research students investigating the protein changes in our vasculature and circulation that may lead to the development of life-threatening cardiovascular diseases. I am particularly interested in understanding the molecular mechanisms that lead to arterial stiffness. Arterial stiffness is closely associated with ageing and is a major risk factor for other diseases, such as atherosclerosis and heart failure. So many lives are touched by diseases such as these; knowing that my research project is contributing to growth in knowledge in this area and may aid the development of preventative therapies in the future really motivates me every day.

Our laboratory has been taking part in the BHF London – Brighton bike ride for five years now. This year was my first year taking part, and I am not a cyclist by any means, having to borrow a bike from a friend for the event. I was both nervous and excited arriving at Clapham common for the 8am start. However, being amongst the thousands of other cyclists and knowing that we were all riding for the same great cause was extremely motivating. The weather definitely could have been better, it rained and rained and rained - just my luck for my first cycle! - but the multiple drinks and snack stops along the provided great opportunities to take a break, hydrate and relax. After the dreaded climb up Ditchling Beacon, we stopped to admire the view and then enjoyed the sense of achievement on the descent into Brighton. Arriving on the beach just as the sun came out with tons of supporters was an amazing feeling. It was really striking how many people – families, colleagues and friends – had come together on the day to make the event a success.

We hosted a bake sale in the lobby of our building to fundraise for the bike ride. PhD student Sean’s infamous gluten-free, guilt-free gooey chocolate torte and a Mary Berry-esque lemon drizzle cake along with other bakes helped us double our target fundraising amount and raise over £1,000 for the BHF. The satisfaction of completing a personal challenge whilst simultaneously being involved in a community event and helping fundraise for a charity that means a lot to me was great. Bring on the cycle ride next year!

Fundraising for the BHF