Barbara Casadei is the BHF Professor of Cardiovascular Medicine at the BHF Centre of Research Excellence, University of Oxford, and President-Elect of the European Society of Cardiology (ESC). Alumni Relations Manager, Paul Sweeten, caught up with Barbara in Oxford to discuss her career, Brexit, the future of research, and her new role at the ESC. 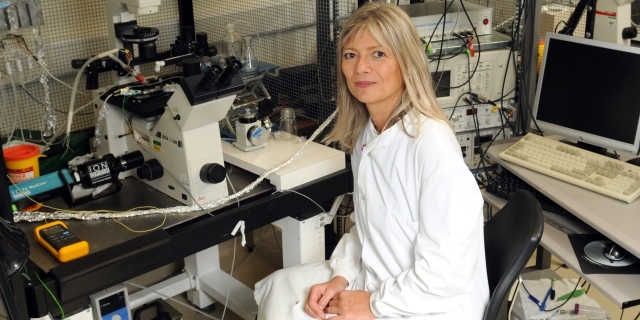 What drew you to come and work in the UK?

Serendipity, to some extent. I was tenured quite early in my career, and two years into my tenure-track position I just couldn’t see myself doing the same thing till I was 65, so I decided to try something different. I was working in a hospital close to one of the Euratom (European atomic energy community) sites where there were people from all over the world, and I realised that what had seemed unobtainable was actually really tangible. All of these people had already made a big transition. I thought ‘if they can do it, I can too’. I had lacked the confidence to leave my job, so this push was exactly what I needed.

I decided to come to Oxford because I was aware of the research going on there. The cardiovascular department was small at the time but Peter Sleight, its head, was very big in the field. So I got in my car one morning and in the evening I was there. I didn’t have a concrete plan, more a sense that I wanted to do something different.

Will Brexit make a story like yours harder to emulate?

I want to answer ‘no’, but I’m afraid that it will make a difference. For me, it was very easy to come to the UK. My training was automatically recognised, I didn’t need a visa, I didn’t need to do any bureaucratic work. As a young person I wouldn’t have been particularly good at thinking about how to approach those things, and I don’t think that the young people around me today are so different. In fact, I think today’s young people might be even more anxious about making big decisions, so if they’re facing significant bureaucratic obstacles to a career change or progression, they may be put off altogether.

Can organisations like the BHF and the ESC respond, and do you feel the internationalisation of research is important to facilitate collaboration with cross-border partnerships?

I often think about this. Changing the system is going to be difficult, so organisations like the BHF and the ESC need to enable people to deal with the system in a way that facilitates their wider view of research. Brexit is likely to leave a big funding gap for the UK, and could seriously affect researchers’ ability to move around and collaborate internationally, so organisations like the BHF and the ESC can help to reduce that risk by lobbying for sustained government funding and protection of international research collaborations.

The BHF could look at options like funding positions at the European campuses of British universities. We don’t want to return to a situation where we ‘only eat what grows in our own allotments’, so both practically and intellectually, we need these partnerships.

Every structure in the ESC is international by nature, and every subject-specific working group crosses borders. As Vice President of the ESC I wrote its research strategy for the next five years, and this involved seeding funds in these networks to fertilize this kind of collaboration. We have also opened an office in Brussels, partly for lobbying, but also partly for supporting grant applications for collaborative work.

Do you think that the cardiovascular research community should be focusing on a broader spectrum of circulatory conditions like stroke and vascular dementia?

Absolutely, and not because cardiologists think they should be taking over these fields of study. There are many links between the heart and the brain, and what’s good for the former is often good for the latter. Cardiologists have developed good knowledge of prevention, and a lot of the work done in this field could be applied to the prevention of what people have traditionally seen as neurological conditions, like stroke and dementia.

This is also true of treatments: much of the logistical and technical knowledge developed by cardiologists (like endovascular techniques) is now being used by interventional radiologists to treat stroke. Considering the benefits of cross-fertilisation and follow-up with patients and the implementation of secondary prevention together with the endovascular treatment, the scope for collaboration is huge.

What is the future for scientific funding, publications and the dissemination of data, and do you think there is a bias for positive results or fashionable research topics?

My vision is that there should be no prioritisation of funding between basic, translational or clinical research. The fundamental difference is between good research and bad research. When the research is bad, it isn’t often because of fraud – which happens but is rare – but about poor design, understanding of methodology, statistical power, and a lack of clarity in the conclusion. You may be able to publish it, but it will not have any impact.

The BHF should, as I am doing at the ESC, embed methodology teaching in all fellowships. This is not so much a slavish commitment to power calculations as a focus on the importance of having respect for methodology to avoid wasting resources. This approach has the greatest impact, rather than thinking retrospectively about what to do with unclear data. It doesn’t matter if a piece of robust research is translational or basic because, ultimately, a piece of robust research will always enrich the scientific environment.

BHF Centre for Research Excellence at the University of Oxford